Staff member
A bitcoin wallet that had been idle since 2013 has resurfaced. The wallet address has completed a massive 1k bitcoin transaction. 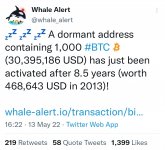 In 2013, the value of one bitcoin was less than $500, and most people were hesitant to buy because it was 'too costly' then.

Now, even in this time of cryptocurrency market collapse, 1k bitcoins, which were not even half a million dollars at the time, are worth 20 to 30 million dollars.

However, the rapidity with which this whale has sold his bitcoins has sparked debate on a variety of topics. People are wondering, why has the whale, which has been dormant since 2013, only been sold BTC now as it is nearing the end of its life?

The Bitcoin whale has opted to sell his BTC at this moment, despite the fact that there is no viable response and I do not want to be a part of stupid speculation.​

How to make money through bitcoin wallet invest

Keeping Bitcoin in Wallet or Exchange ?

Claim your free Ripples ( XRP) directly into your wallet instantly !.