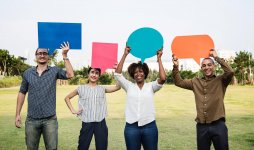 If you've ever attended a meeting, seminar, or other business event, chances are you've learned about goal setting. Clearly identifying and recording the steps to your objective with a timeline is par for achieving long-term success, yet most people fail to do so. This is often why people give up, letting themselves be distracted by the vicissitudes of life, or giving in to a particular situation. They use a myriad of excuses to justify this, rather than admitting they got off course and then immediately getting back on.

But even those who do set goals often don't do it in a way that helps them achieve those goals. They may think about them and maybe even write them down. Some may even go so far as to review them every now and again. while those are certainly necessary components for goal achievement, they're often missing a key part--telling someone else!

There are many benefits to sharing your goals with others you believe will support you. When you tell them your goals, there's a tendency to be more committed. You work toward success to avoid having to face them and admit you've fallen down on the job. You put yourself on the spot. You now have someone to be accountable to--cheerleader, coach, or mentor--and that's a good strategy.


"The wise man does not lay up treasure. The more he
gives, the more he has."
-Chinese Proverb


Unfortunately, most people don't write their goals down, let alone tell others, for they fear having to be accountable to themselves! they feel it's better not to commit to something, even though they want it very much. That way they'll never be disappointed. But what they don't realize is the biggest disappointment of all comes in not going for it which, of course, makes it impossible to ever get it! They get a temporary rest by taking themselves off the hook and not going for it. Do they think that what they want is somehow going to magically drop out of the sky someday, and fall right into their laps? I don't think so. It's been proven time and time again that someday becomes a new word called never!

If their desire is true and they're totally sincere, it will come back to haunt them throughout their life. There won't be any long-term reprieve! They may think keeping the desire a secret helps them save face, but they then get to live with disappointment and regret. They succumb to no--right from the get go. This is the main reason for not attaining most desires! People are actually telling themselves no before they give themselves a chance for yes and the success it brings.

These people don't want to have to look themselves in a mirror. They don't want others coming up to them constantly asking how they're progressing. Especially if (when!) it isn't going well. They don't want anyone laughing at them. Let them laugh! If they were committed to their goal and took the time to let others know, that fear of being accountable just might be the incentive they need to keep going. It may seem impossible or require a lot of effort, especially at first, but then all worthy aspirations are and do.


"All things are difficult before they are easy."
-John Norley


Having people who will be reminding you of your goals is a powerful way of keeping them in front of you. Having people who can help you refocus your energy to get the job done is actually something to welcome rather than fear. Telling others is a sign of commitment, as long as it's not empty talk and it's followed by action.

Sharing your goals with others, especially those who have done or know how to do what you're wanting to do, opens up the possibility that these people will help you achieve them. Letting such people know what you want and why, and that you're looking for advice and assistance, often opens the door for others to come into your life and help. If they're in the know themselves, they'll understand that by helping you they enhance their own success. Just the feel-good of doing it can be a big plus for them. The more you go along on your path with a generous heart and spirit, the more you'll realize this.

Oh, and one more thing. Don't share your goals with anyone you believe would be negative toward them. Unfortunately some people get jealous. For your own well-being, just forgive them and avoid burning any bridges you may want to cross later. These folks are often unaware of how detrimental it is to be envious and would be far better off following their own path.
You must log in or register to reply here.

How do you manage stress