Staff member
On Wednesday, June 22, Tether CTO Paolo Ardoino has announced that the company will launch GBPT, a new stablecoin which is pegged on British Pound.

The new crypto will be launched in July this year on Ethereum Blockchain. Tether has already launched 4 fiat-pegged stablecoins in the crypto market, GBPT will be fifth.

USDT was the first one, it was pegged on US Dollar, and was launched on Bitcoin Blockchain, on 6 October 2014. After that Tether launched EURT (on Euro), CNHT (on Chinese Yuan), and MXNT (on Mexican Peso).
The first launch USDT has the highest volume, it is used as main stablecoin in almost every exchange platform.

Stablecoins are under suspicians since the fall of Terra UST. Currently Tether's market cap is also declining, however according to Tether, its stablecoins are not algorithmic like UST, but actually backed by cash of their reserve. 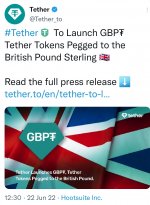 People are not exited with this announcement, but trade will decide what will happen to it.​

USDC, a stablecoin on the Ethereum blockchain surpassed the rival Tether (USDT).

What is Tether in crypto

Earn Money 3 sites to earn free crypto that is under 1$ (doge,ltc,tether)